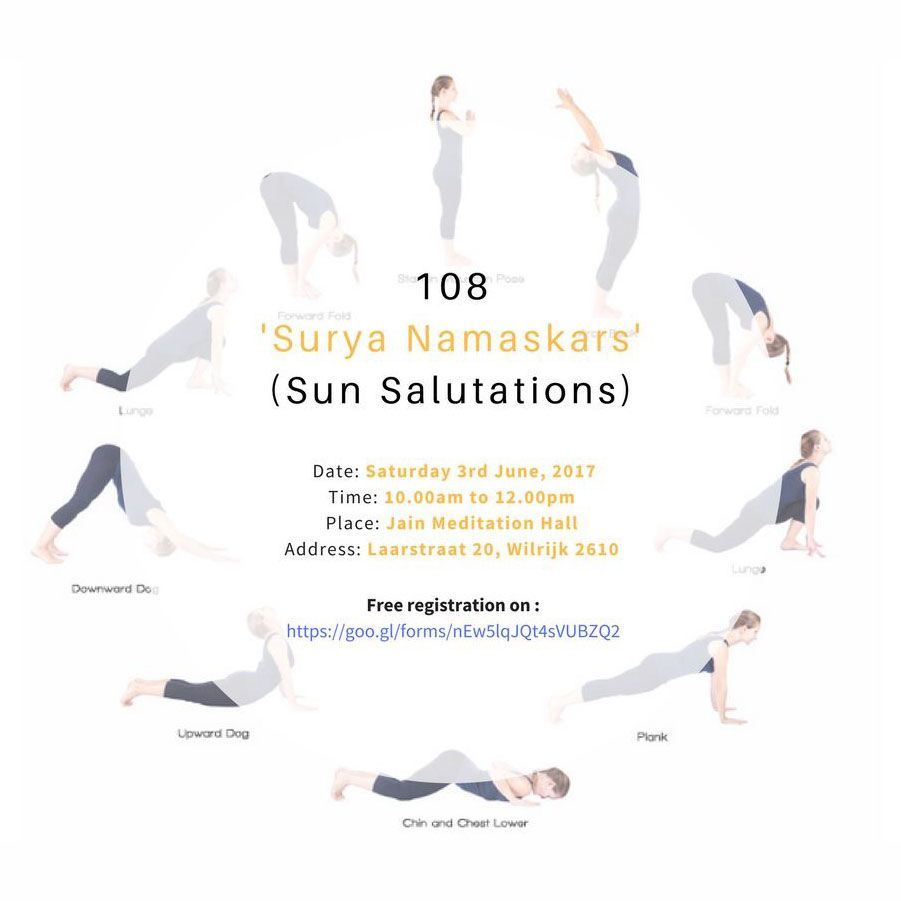 As a lead up to the 'International Day of Yoga' (IYD), Jain Cultural centre of Antwerp (JCCA) brings to you and the people of Antwerp another energising and challenging session of yoga !

We will have the host of the 'IYD' Reetu Mehta (yoga instructor) conduct this session.

In this event we will be doing 108 'Surya Namaskars' (Sun salutations) together. It seems a lot, but each one does as many as he or she can. When ever you are tired, you stop and sit on your mat to meditate and visualise yourself doing it. When you feel your energy is back and you are ready, continue with the Surya Namaskars again .

The idea in doing this event is to bring about a deeper change in people.

A Surya Namskar is the most comprehensive work out. It works all the major muscles of the body. Although it is big physical challenge, it also reaches the energy source deep within oneself, and stimulates the mind in a meditative way.

Why 108 ?...
108 is considered to be the most sacred number in the practice of Yoga. In fact in most of the other ancient religions and cultures such as Hinduism, Jainism, Sikkhism, Buddhism, Islam and so on, 108 is considered a very auspicious number.
108 Sun Salutations in yoga practice is often used to honor change, for example, the change of seasons or any other important change, whether peaceful or tragic. It brings about respect and understanding.

Just a few reasons why the number 108 is auspicious:

-There are 108 Nadis, the energy channels intersecting the 'Anahata' Chakra (the heart chakra).
-Renowned mathematicians of Vedic culture viewed 108 as a number of the wholeness of existence. The number connects the Sun, Moon, and Earth: The average distance of the Sun and the Moon to Earth is 108 times their respective diameters. Such phenomena have given rise to many examples of ritual significance.
-The number's significance is open to interpretation. But 108 has long been considered a sacred number in Hinduism and yoga. Traditionally, malas, or garlands of prayer beads, come as a string of 108 beads (plus one for the "guru bead," around which the other 108 beads turn like the planets around the sun). A mala is used for counting as you repeat a mantra.
-According to yogic tradition, there are 108 marma points, or sacred places of the body, similar to Acupuncture points understanding of which one would probably be able to heal most of the diseases. There are also 108 Upanishads .

The list goes on…
The no. 108 has its importance in not only in Yoga and Hinduism but in mathematics, science, spiritual spheres as well.
So now let's just pick up the mat and get going....

Join us as we enjoy creating this immense energy like the sun, within and around us as we do the 108 Surya Namaskars together !
Feel free to join us EVEN IF you CAN NOT do the Surya Namaskars for any reason, but want to just be a part of this energy and spirit. You can use your time, and the energy around to meditate and visualise yourself doing the surya namaskar instead.
This session is open to men and women and children (above the age of 12yrs).

If you would like to join, please register yourself via the link below.

PLEASE BRING YOUR OWN YOGA MATS and a TOWEL or HAND NAPKIN and your own WATER BOTTLES.

Looking forward to seeing you there in large numbers for this special YOGA Event.

Surya Namaskar (Sun Salute) for knee and back problems by Reetu Mehta.